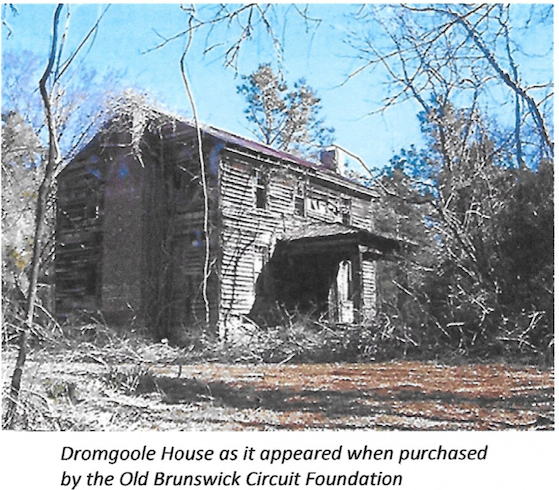 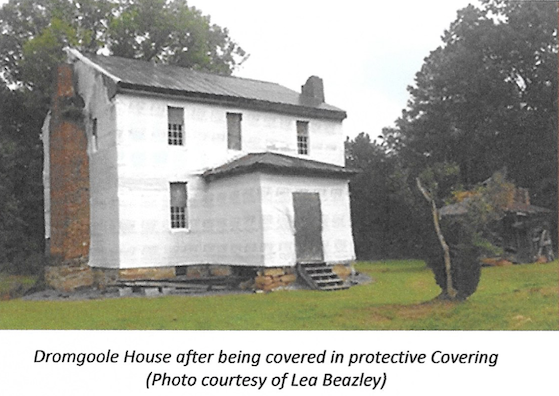 Located in Brunswick County Virginia, Canaan was the plantation home of The Rev. Edward Dromgoole Sr., a traveling minister of the Revolutionary War and early national periods. This “historic gem” is situated in Valentines, Virginia just off the Christanna Highway (route 46) -- a road that Brunswick County is developing as a tourism corridor. Once restored, this plantation home will be an additional site for visitors to enjoy along this corridor. The Old Brunswick Circuit Foundation, as a 501(3) c non-profit organization and the owner of this historic building, has recently been awarded a grant that will help save it from potential collapse.

As proven by dendrochronology, Canaan was built between 1796 and 1799. This home had solidly stood for over 200 years but after Hurricane Michael in the fall of 2018 inundated the county with rain, a dramatic tilt was noticed in its east chimney. Given that this chimney is timber-tied into the house, if the chimney should fall so will the house. Local resident and builder, Tom King, completed the necessary emergency structural work to brace the chimney in its tilting position and to pour concrete to unify and support its base. Although the stress on the bracing and on the west chimney remained evident, the Old Brunswick Circuit Foundation (OBCF), could not do the work needed to permanently stabilize and repair the chimneys and foundation until they could raise the necessary funds.

A solution came in the form of financing from the Emergency Supplemental Historical Preservation Fund (ESHPF). Administered by the National Park Service, 4.7 million dollars of these funds were awarded to the Virginia Department of Historic Resources (VDHR). These monies allowed VDHR to offer sub-awards to historic sites located in 52 counties and cities in Virginia that had been negatively impacted by Hurricane Florence and Michael. The OBDF applied for this grant because-- as board member Ann Keeling said, “It was the type of grant opportunity that was ideally structured for a small non-profit organization like ours”. Having made an application for the grant, the OBCF recently got the news for which they anxiously awaited: the National Park Service in partnership with the VDHR had awarded the OBCF an initial grant award amount of $199,605. For Canaan, this grant will fund the stabilization and repair of its chimneys and foundation as well as the acquisition of a Historic Structure Report and an Engineering Assessment. Both of these planning documents will inform the construction needed.

Canaan is the only surviving home in Virginia of an 18th Century itinerant minister or Methodist “circuit rider”, Rev. Edward Dromgoole, Sr. Dromgoole was influential in spreading John Wesley's Methodist movement in America. . It was in this home that Dromgoole and his wife, Rebecca Walton Dromgoole, hosted class meetings and worship services. This house also served as an important hospitality and educational stop for Methodist preachers, notably Francis Asbury, one of the two first Methodist Bishops in America. Dromgoole died May 13, 1835 and is buried on the property. Canaan later became the home of his son, Hon. George Coke Dromgoole, who represented his region of Virginia, first in the state legislature for 13 years, then in Congress for 7 years.

More information about The Old Brunswick Circuit Foundation and Canaan can be found at https://vaumc.org/oldbrunswickcircuit. To support the preservation efforts of the Foundation, tax-deductible donations payable to The Old Brunswick Circuit Foundation may be sent to P. O. Box 385, Lawrenceville, VA 23868-0385 (with memo line “to Dromgoole”); or donations can be made via PayPal@OBCFVA on Facebook.